Observations from the AM&AA 2016 Winter Conference

Winter Conference of the Alliance of M&A Advisors (AM&AA)

During the past ten years, private equity firms (PEG) have become a more dominate player in the merger and acquisition market.  Today PEGs represent approximately 42% of all transactions, whether in the creation of a platform or add-on.  Most of the shift occurred between 2008 and 2011, when PEG activity increased from an estimated 26% of all transactions to our current level.  PEG transactions over the past few years have been relatively even between platform and add-on activity.  Reasons for this shift could be due to PEGs increased focus on growth through acquisitions. And, the fact that the vast majority of companies will never complete an acquisition. PEGs have an abundance of equity and access to debt markets, which many privately held firms do not.  In 2008 when the shift started to occur, many privately held firms were retrenching due to the recession.  Although PEGs had their fair share of troubled companies, the PEGs still had investable funds that needed to be deployed.

Why Hire an Investment Banker? 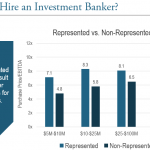 This would lead you to believe that the trend is to see more investment banking led transactions.  However, for transactions below $250 million, the exact opposite is happening.  Since 2006, there has been a steady decline in reported transactions using investment bankers, from approximately 8% to 5% in 2015.  Clearly, business owners have not been getting the message of our value.We often get asked the above question.  The answer is simple – data shows that companies represented by an investment banker receive between 25% – 48% more consideration than non-represented companies in a transaction.  Typically, the answer to the question is market knowledge, access to a greater pool of acquirers, understanding of the transaction process, and allowing the owner/executive team to concentrate on managing the business.  However, the bottom line to all the above is, you typically get the best value when hiring an investment banker.

The most likely reason owners do not hire an investment banker is because the sale process typically starts with a telephone call or letter from a buyer.  The owner believes “why pay a transaction fee when I already know the buyer”?  Only after the sale is complete does an owner reflect and realize that value has been left on the table.  Much too late to change the deal.

From Where do Buyers Come? 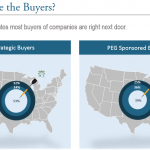 This “buyer next door” strategy is not so prevalent amongst PEG sponsored buyers.  You find less issues with geographic constraint amongst PEGs.  There is little percentage difference buying companies within different regions, again giving validity to the nature of PEGs to grow companies through acquisition.Is the buyer of your company “next door”, in your geographic region?  You have a 50/50 chance of finding the strategic buyer in your geographic region.  Surprisingly, the next largest group of strategic buyers (32%) can be found more than one region away.  This includes foreign buyers, which represent approximately 7-8% of transactions.  Most of these foreign buyers are from England, Canada, and Australia.