Are you a business owner considering a partial or total ESOP (Employee Stock Ownership Plan)?  If so, you are likely to find that the Tax Cuts and Jobs Act of 2017 will produce greater benefits for you and your company’s stakeholders than before the law was passed. 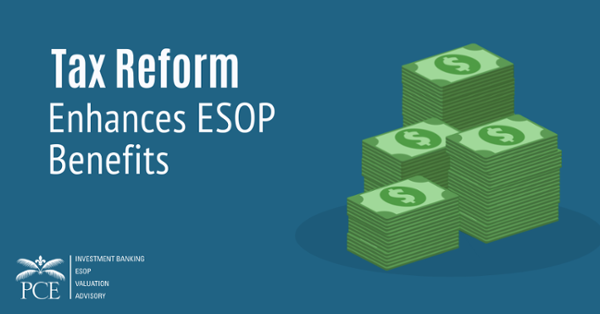 ESOP transactions rely on valuations to inform the negotiated value that the ESOP trustee pays for the stock of the company.  The valuations contain a variety of company-specific information as well as public market data to determine fair market value, including valuing estimated future cash flow assuming full corporate taxes.

Tax reform will have a significant positive impact on these valuations as the after-tax cash flows have now increased due to the lowering of top corporate income tax rates from 35% to 21%.  Public stock market returns, on which valuations are also based, will also experience a boost from the lower corporate tax rates.

For most companies, a relatively small portion of the benefit will be offset by a broadening of the tax base, including a new limitation on interest expense deductions.

(Want to learn more about ESOPs?  Read our ESOP eBook to see how an ESOP could benefit your company.)

With an ESOP it’s possible for owners of C corporations to structure the sale to defer paying capital gains taxes potentially indefinitely under Code Section 1042.

Under tax reform, this capital gain deferral generally will be more valuable to sellers who reside in states that impose capital gains taxes.

While the federal all-in capital gains tax rate remains at 23.8%, the near elimination of the federal deduction for state taxes paid means that effective state capital gain tax rates are increasing for such taxpayers.

This effect makes the Section 1042 benefit more attractive for owners who are subject to state capital gains taxes and can be a major advantage for an ESOP transaction as compared to a traditional taxable sale.

S corporation owners have historically faced a conundrum regarding whether to convert to C status prior to an ESOP transaction to enable the Section 1042 benefit, because the corporation would have to retain its historically disadvantageous C status for five years after the conversion.

Tax reform reduces this disadvantage because corporate tax rates are now much lower than rates for pass-through entities.  The top pass-through rate was reduced from 39.6% to 37%, subject to additional new provisions.

These new provisions include (i) the near elimination of the deduction for state taxes that effectively increases tax rates, and (ii) a new 20% deduction for certain pass-through income that is subject to very complex limitations and will not be fully available to many pass-throughs.

Overall, we expect more S corporation owners to convert to C status to avail themselves of the capital gain deferral opportunity.

As mentioned above, while one theme of tax reform was lower rates, another was expanding the tax base.  An important provision to expand the tax base relates to a new limitation on the deductibility of interest expense, effective in 2018.

This new provision defers interest expense in excess of 30% of EBITDA from 2018 to 2021, and 30% of EBIT thereafter.  The effect of this provision will be to offset to some extent the benefit of the lower rates for levered companies.

For an S corporation that is ESOP-owned, however, all income passed through to the ESOP shareholder is not subject to tax.  Thus, in a 100% ESOP-owned S corporation, the new limit on interest deductibility will have no adverse effect, as it will in other companies.

Over the past years, owners choosing to sell to ESOPs have enjoyed attractive financing markets with high advance rates and low cost of funds allowing them to realize more cash at closing with a lower cost.

In addition, most of the supplementary company tax benefits remain.  This includes tax deductible principal and interest (subject to the new limitations on interest expense) on the ESOP loan, and ESOPs as non-taxpayers (which is particularly valuable in pass-through entities).

Finally, none of the employee benefits have been altered. The company’s employees are the beneficiaries of stock ownership after the transaction and this continues to provide increased benefits for them in retirement.

PCE is recognized as the leading full-service investment bank that initiates and implements ESOP structures.  We would be happy to discuss how a partial or total ESOP structure could be more attractive to owners and companies as a result of tax reform.

We are extraordinarily well-situated to help analyze the specific effects on owners and companies considering how an ESOP could benefit them.

Contact us today to get more information on how an investment banker can help you get the greatest value when selling your business.  Or, visit our ESOP Planning Library to find additional resources to help guide you through the ESOP planning process.