The Time is Right for ESOPs

With the mixed messages in the economy today, it is hard for business owners to know how to plan for their future. The uncertainty is heightened for business owners considering an exit from their business. Earnings for public companies are mixed, and the stock market continues to be volatile. Lay the ongoing COVID-19 pandemic on top of all this, and we have some real uncertainty in the market. One way to navigate a full or partial sale of your company, given this uncertainty, is to sell all or part of your company to your employees through an Employee Stock Ownership Plan (ESOP). The flexibility of the deal structure and the tax advantages that an ESOP provides make it a particularly attractive exit strategy in the current environment. 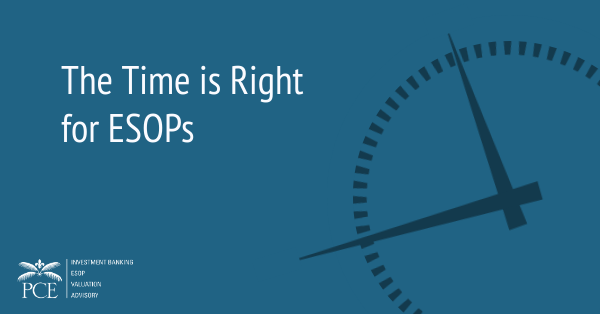 Valuations are holding up

A sale to your employees through an ESOP is intended to mirror market conditions as much as possible. To determine the proper value an ESOP should pay for the stock they’re acquiring, we look to observable market data for companies in the same industry as the company establishing the ESOP. This data is derived from other companies that have sold as well as from publicly traded companies. Our PCE industry reports indicate where your specific industry valuation may be trending, but for the broader market, we can look to the S&P 500 as a general indicator of how publicly traded companies have performed. The S&P 500 is down approximately 17% year-to-date but still has positive annualized returns of nearly 11% over the past three years and 12% over the past five years. ESOP valuations are far more objective than third-party valuations, so the valuation of your company in the sale to an ESOP would likely be higher in a volatile market compared to the sale to a third party.

Keep more of your proceeds from the sale

The valuation for your company doesn’t mean much if you can’t realize it in after-tax dollars. There is genuine concern that capital gains rates could rise following the 2022 election cycle. But a sale to an ESOP can mitigate all those tax problems. ESOPs allow you to realize more proceeds regardless of the prevailing capital gains rates. That’s because when selling to an ESOP, Section 1042 of the Internal Revenue Code allows you to defer and likely eliminate altogether your capital gains taxes on the sale of your stock. This could be as much as a 60% increase in net proceeds, depending on your basis, if you’re in the highest individual tax bracket of 37%.

Reduce your corporate or pass-through taxes

So reasons are mounting for your sale to an ESOP: Valuations are still strong. You can reduce or eliminate your capital gains taxes from the sale. And there’s one more big consideration: the company itself also realizes tax advantages that can help it pay off the debt from the transaction. What debt are we talking about? Let’s explain. An ESOP itself doesn’t have liquidity that would allow you, as the seller, to realize true diversification from the sale. So the ESOP counts on lenders to provide this liquidity. Those lenders rely on the credit worthiness of the company to determine how much they can lend. There was an initial pull back at the beginning of the pandemic, but because ESOP-owned companies have shown great resilience and efficiency over the past year and historically, lenders have fully embraced ESOP transactions again.

ESOPs have the ability to more efficiently use cash, as they are able to deduct contributions to the ESOP from their taxable income. Then the companies and/or the ESOP can either directly or indirectly use these contributions to repay the lenders for any monies borrowed to facilitate the ESOP transaction. Depending on whether or not your company elects to be taxed as a corporation or as a pass-through entity, this could give it an extra $0.21 to $0.37 per dollar to repay the bank debt pre-tax instead of after-tax.

In addition, if your company is a pass-through entity, the ESOP trust that holds the stock on behalf of the employees is a tax-exempt trust. This means any income passed through to the trust is exempt from income tax. In its most advantageous example, if the ESOP owns 100% of the pass-through entity, i.e., the company you sold to it, that company will pay no federal income taxes, giving it a tremendous cash flow kicker to repay debt and grow. This makes lending to the ESOP all the more attractive to banks.

Having a well-performing business is the most important step to achieving a successful exit. But the timing of your exit also plays an important role in realizing your goals. We don’t know what 2023 will bring, but we do know that now is a very good time to consider an ESOP as your exit strategy. You can realize a strong valuation for your business, see more after-tax dollars in your pocket, and leave the company in an advantageous cash flow position to grow and prosper.