As privately held businesses mature and grow in value, the desire for, and prudence of, personal liquidity and diversification grows in importance to business owners.  When much of one’s personal net worth is tied to a highly successful, yet illiquid business, the owners are often faced with the question “how can I personally diversify yet remain in control of my company”? 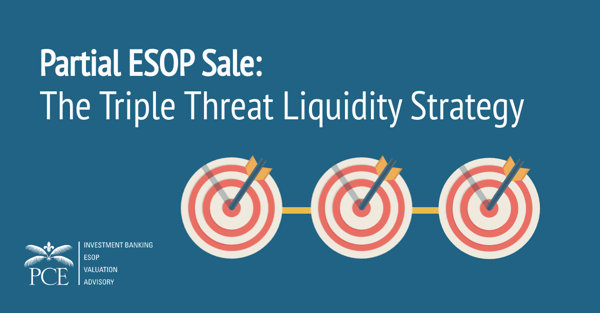 The use of an Employee Stock Ownership Plan, or “ESOP”, provides business owners a distinct advantage toward personal liquidity.  An ESOP allows the business owner to cash out a portion of his/her business, retain control, while providing excellent tax benefits to both the shareholder and the company going forward.  Furthermore, the benefits an ESOP provides to the company and its employees are significant, which makes the ESOP a triple threat liquidity strategy.

Value is often at the forefront for the business owner when they begin to evaluate liquidity strategies.  The value of a company sold to an ESOP is determined by a valuation approach that centers on the Fair Market Value (“FMV”) of the business.  When the FMV of the business is established, the business owner can determine the amount of chips he or she would like to take off the table to diversify their holdings.  The ability to control the percentage of the business being sold is just one of the reasons ESOPs are so appealing to business owners.

Ownership Control in an ESOP

It’s only natural that business owners would want to retain control of a business they have spent years building.  Most other business divestiture options would require a majority or full sale of the business, but an ESOP does not. The ESOP is a financial buyer and passive investor that is relatively indifferent as to the percentage of the company it owns, including a minority position.  The actual ownership of the company is held within a trust which is governed by a fiduciary.  While the employees do not own the shares directly, they are the beneficiary of the trust and all assets owned within the trust.  This indirect ownership model doesn’t provide a mechanism for day to day control by the ESOP participants. From a governance perspective, the company often operates exactly the same pre-transaction as it does post-transaction.  This is particularly true in the case of a partial sale to an ESOP.  This partial sale allows the current owner(s) to retain the majority of the value for themselves while still providing a meaningful benefit to the ESOP participants.

Tax Advantages in an ESOP

The capital markets today remain robust and available with favorable terms; specifically, in a partial/minority sale to an ESOP.  As referenced above, an S-Corp ESOP pays no federal tax on its percentage of ownership income and therefore allows for increased cash flow to repay bank debt.  Banks and capital providers welcome the minority ESOP transaction, which allows the bank to get comfortable with the business operations in addition to not having too much leverage on the company to service its debts and operations. Read more about ESOP Tax Advantages.

Employee Benefits in an ESOP

When the ESOP participants assume the employee-owner mentality, they tend to think more about the day to day operations of the business, how their choices affect the business as a whole, resulting in a positive culture and overall improvements for themselves, the company and any other shareholders. Coupled with the owner and company benefits, the employees are likely to receive above average returns on the stock. According to an Ernst and Young study completed in 2015, the total returns per participant for S-corporation ESOPs from 2002 to 2012 grew by a compound annual rate of 11.5%. Over the same time period the S&P 500 Total Returns index grew at a compound annual rate of 7.1%; showing ESOPs beat the S&P during the same period by 62%.

Shareholder, Company and Employee Benefits with an ESOP

The example below considers a 30% sale to an ESOP and highlights some of the benefits provided to all involved. 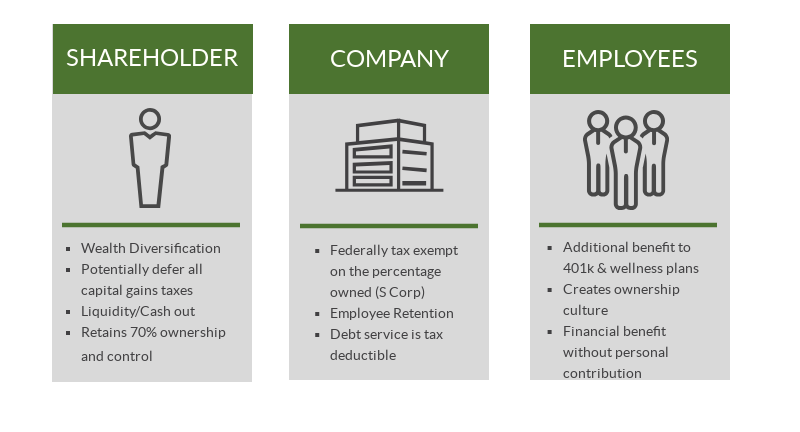 Contact us today to get more information on how an investment banker can help you get the greatest value when selling your business. Or, visit our ESOP Planning Library to find additional resources to help guide you through the ESOP planning process.