Three Questions to Ask When Exploring an ESOP

The sale of stock to an employee stock ownership plan (ESOP) is not a singular decision. Rather, it is the culmination of many decisions leading business owners to decide that the sale to an ESOP is a good fit for them, their company, and their employees. 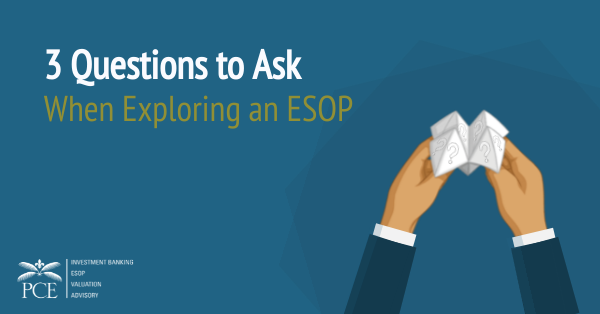 As a business owner, you have discretion over these decisions, among many other important considerations, thanks to the flexibility provided by an ESOP structure.

The flexibility of ESOPs is simultaneously exciting and daunting. Having so many ways to structure a transaction is great but deciding which choices to make is a key challenge. Among those initial, challenging choices is determining the answer to these key questions.

There is no one right answer for all companies—but there is one right answer for your company and ownership group, based on the underlying characteristics of your business, your stage of life (and the company’s), your plans for the future, and the many company- and owner-specific considerations that can be analyzed and detailed in an ESOP feasibility study. While the answers may differ for various business owners, the questions they ask are often similar. Using these questions as a tool will help you start to educate yourself about ESOPs.

How will the ESOP transaction be financed?

ESOPs are inherently leveraged transactions, meaning your business takes on debt as part of the transaction, whether from a third party (such as a bank) or to the selling shareholder (appropriately known as “seller financing”). In either case, your company will have a different balance sheet and different claims on cash flow compared with your pre-ESOP financials.

If your company’s balance sheet is subject to scrutiny by other parties—such as bonded construction companies or regulated financial institutions—the amount of leverage is a vital input into how you do business. That can play a significant role in deciding how much of your company to sell to an ESOP.

One solution is to sell a minority tranche of the company to the ESOP initially, work down the debt, and then decide whether to sell more or to remain partially owned by the ESOP. Additionally, if your company has heavy CapEx to fund future growth or as part of your business model, the amount of leverage may be restricted by the need for other borrowing or debt service limitations, which could mean you’ll need a partial ESOP at the outset.

How will the ESOP company be taxed moving forward?

ESOP tax advantages can also play a role in deciding how much you should sell to an ESOP in the first transaction. Many sellers want to get to 100% ESOP ownership because that can allow the company to operate in an income-tax-free environment going forward, providing a tremendous cash-flow advantage. As discussed above, however, this may not be appropriate for every company.

An ESOP structure will permit your company to deduct contributions to the ESOP (and C corporations are even able to deduct dividends paid to the ESOP), which reduces taxable earnings and therefore lowers your company’s taxes regardless of the amount owned by the ESOP. Your company, like many others, could greatly reduce (or maybe even eliminate) the taxes it owes compared with your pre-ESOP tax profile—making the amount of the company sold to the ESOP less important from a tax-savings perspective.

How much of the company will be sold to the ESOP?

Company valuation is another significant factor that often plays into how much to sell to an ESOP at the start. While the ESOP valuation needs to be at or below fair market value (FMV) to comply with Department of Labor standards, this can mean different things to different owners.

If you are satisfied with your company’s FMV, you might decide to sell 100% to the ESOP in order to lock in that valuation. Or perhaps you believe there is continued upside in the stock you own, so you decide that holding on to some of that stock is advantageous. If your desire to sell the stock for more in the future is driving your decision to sell less of the company today, there is an added benefit: you have a ready buyer in the form of the ESOP, so you won’t have to search for one when you’re ready to sell.

Giving stakeholders the ability to make decisions that work best for them is the ultimate benefit of flexibility. For business owners, most often this comes down to timing. If you want time to exit the business, or if your business needs time to support the transaction, an ESOP can work within your time frame—whether that results in an ESOP owning 100% of your company right away or acquiring a minority portion and then retaining partial ownership for the long term.