Companies that choose to be ESOP-owned are often celebrated for solving one of the thorniest issues facing privately held companies: ownership succession. Having taken care of this major challenge, the management team can now focus on executing the business plan while operating in a tax-advantaged or tax-free environment. However, these tax benefits are likely changing, impacting ESOP-owned companies, even those that have become 100% ESOP-owned S-corporations operating in a tax-exempt environment. The proposed changes will impact ESOP-owned companies differently depending on whether the company is an S-corp, a C-corp, a partially owned ESOP, or a 100% ESOP. 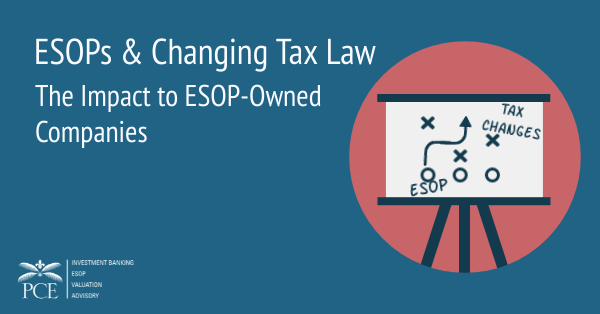 Impact on All ESOPs: Increase in Corporate Tax Rates

All publicly traded companies are C-corporations for tax purposes, which means an increase in corporate tax rates will negatively impact the value of your ESOP-owned company regardless of how you elect to be taxed. These impacts include the following:

The above proposals may have no direct impact on your company, but because they will impact the publicly traded companies used in your valuation, you can expect a lower valuation compared to what you would have seen if the tax code were not changing.

ESOP company valuations will be impacted as soon as the increased tax rate is law. For ESOP companies with a December 31 year-end, this will be reflected in the December 31, 2021, year-end valuation. If you’re considering a transaction in which the ESOP is buying or selling stock before year-end but after the increase becomes law, it would likely also be considered in the valuation. Again, this will impact all ESOP-owned companies whether they are an S-corp, a C-corp, a 100% owned ESOP, or a partially owned ESOP.

Outside of the valuation impact, the proposed increase in corporate tax rates will only impact the cash flows of C-corp ESOPs. Not because they’re ESOPs but because they are C-corps and subject to corporate tax regardless of their shareholder make-up. If your ESOP company has an outstanding ESOP or “internal’ loan, then you ought to consider paying that loan down more aggressively or making a one-time dividend to further shield your corporate profits from the higher tax rate. If you do plan to contribute or dividend this additional cash into the ESOP, make sure you evaluate this impact on employee benefit levels and future repurchase obligations.

The potential increase in personal capital gains rates will not impact ESOP-owned companies directly but it could impact the shareholders of partially owned ESOPs or change how companies and shareholders deal with outstanding seller financing.

Many partially owned ESOP companies thrive in this environment by finding an ideal balance between ESOP ownership and non-ESOP ownership. However, there are also quite a few partially owned ESOP companies that want to get to 100% ESOP ownership, and the increase in the capital gains rate may change the timing for shareholders wanting to sell. The proposal for capital gains to increase from 20% to 39.6% for individuals with $1 million in annual income could cause taxes due on a sale to nearly double, greatly reducing proceeds. This doesn’t factor in any valuation pressure from the increase in corporate tax rates mentioned above. So all these proposals will likely motivate sellers to accelerate their plans to sell in 2021 or delay their sale significantly in an attempt to push proceeds into a lower tax environment (that may be) years down the road.

This proposed increase in capital gains taxes will have a similar impact on outstanding seller notes in which the seller has chosen to be taxed under the installment sale rules. In that instance, the capital gains taxes due when the proceeds are received will be at the prevailing capital gains rates. If the proposals become law, you’ll pay twice as much tax next year compared to this year. Sellers will want their notes repaid early or will elect to accelerate their tax into 2021. This could create an opportunity for your company to refinance at a lower interest rate and/or buy in any associated warrants that were issued alongside the notes. If you have the ability to refinance today, this could create significant savings related to lowering your company’s cost of capital.

Finally, the proposed increase in personal tax rates will have an impact on an S-corporation that is partially owned by an ESOP. In most of these companies, there is an obligation to make a distribution to the non-ESOP shareholders to cover their tax liability due to their ownership in the company. S-corp rules dictate that a pro rata distribution be made to the ESOP since S-corp shareholders need to be treated equally from a financial perspective.

Oftentimes, this results in a significant flow of funds into the ESOP trust. That can become a problem if the trust doesn’t have an immediate plan to use the cash. You don’t want money sitting doing nothing. A rising personal tax rate will compound this problem. If the cash is used to pay down an internal loan, this could result in a rapidly rising ESOP benefit level. This is an issue that you can and should manage by actively controlling what happens to that cash and monitoring the balance of cash and shares in ESOP participants’ accounts.