The Biden administration recently proposed several new spending packages that include changes to the tax code. The changes will impact some of the tax benefits currently enjoyed by companies owned by Employee Stock Ownership Plans (ESOPs) and by owners who choose to sell their stock to a new ESOP. While these changes will certainly affect the structure and the timing of ESOP transactions, we do not expect they will have a long-term negative impact on ESOPs, which will still hold a relative advantage over other types of exit strategies. However, we do look for business owners to either accelerate their transactions in advance of some of these changes or wait in hopes of a different administration in 2024 and a potential rollback of some of these tax changes. 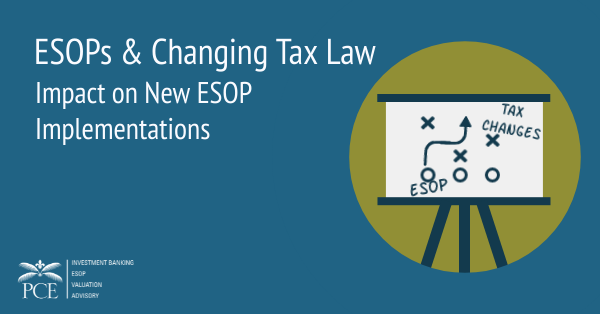 Our focus here is the American Jobs Plan and the American Families Plan, both of which are in proposal form only and have a long way to go before becoming law. Thus, the details may shift, but we do expect the current proposals to be directionally accurate. Tax rates are going to rise, and when they do, that will impact those who wish to sell their stock to ESOPs (and other types of exit strategies) and the companies that become ESOP-owned.

The timing of the impact of these tax code changes is another factor for you to consider. While there is no written rule on how valuation firms will consider this, we believe they will adjust valuations as soon as the changes are signed into law (not when they go into effect). Consequently, if you are considering a sale to an ESOP, it would benefit you to close the transaction not just before year-end, but before the American Jobs Plan is passed into law.

Impact of an Increasing Capital Gains Tax on ESOP Transactions

The American Families Plan focuses on personal taxes, including a significant proposed change in capital gains rates for any individual earning more than $1 million a year. For many people considering a sale of their business, a taxable gain in excess of the $1 million threshold would likely be generated and would therefore be subject to a 39.6% capital gains rate, as opposed to today’s 20.0% rate (or 23.8% if you’re subject to the Affordable Care Act premium). In an ESOP context, this would impact you if you sell while your company is an S corporation, because you would be subject to the capital gains taxes. However, owners who revoke their S corporation election and become C corporations (or those that already own C corp stock) will be able to continue to defer their capital gains taxes under the provisions of Internal Revenue Code Section 1042.

Business owners’ ability to defer or eliminate their capital gains taxes in a sale to an ESOP may make this liquidity strategy a more attractive option going forward, as the relative savings compared to a taxable transaction could change from a 20.0% advantage to a 39.6% disadvantage (see table below). A number of other factors go into this decision, but on net proceeds alone, ESOPs will become more popular.

Note: Does not consider shareholder basis, state capital gains tax or the Affordable Care Act premium, as those will vary.

Of course, this presumes the §1042 capital gains tax deferral benefit remains in place. While there is no current proposal to change that, the American Families Plan did propose limiting the ability to defer capital gains taxes utilizing Internal Revenue Code Section 1031, which follows the same principle as §1042 but with real estate instead of securities. This is something we are keeping an eye one.

The proposed increase in capital gains rates would likely make ESOPs more attractive compared with other liquidity strategies, and the threat of a change in the ability to defer capital gains taxes makes 2021 an opportune time to take advantage of the ESOP strategy.

While estate planning goals don’t typically drive the sale to an ESOP, they are often considered in conjunction with one another. The sale to an ESOP has historically created advantageous gifting opportunities, which can reduce an individual’s estate. The American Families Plan proposal to eliminate the step-up in basis for gains over $1 million could make this even more important, as it increases the potential for leaving heirs with a significant tax obligation and less ability to pay. ESOP transactions can create additional ways to get value out of your taxable estate, which would become more important if this proposal passes as presented.

The exemption for family-owned businesses and farms is an additional provision in the American Families Plan that could impact transactions in general. The provision could allow a step-up in basis if the businesses continued to be owned and operated by the family. This could cause a decrease in transactions all together, including sales to ESOPs.

If all the proposals discussed above pass unchanged, it would have an impact on all transactions, including ESOP transactions. We anticipate this would drive significant transaction activity for the balance of 2021 as business owners try to complete their transactions prior to these tax increases going into effect. Some of these transactions would’ve occurred naturally in the 2022 or 2023 time frame, so you can expect transaction volume to be more muted in those years.

The flexibility of ESOP transactions could make these types of deals more resilient than more traditional M&A options. For instance, you could decide to sell a portion of your company to the ESOP this year but continue to hold the majority of your stock until the tax environment is more favorable. Another potential strategy would be to sell 100% of the company today and receive a mix of cash and seller notes (with a market return) as proceeds. The cash would be taxed at today’s capital gains rates while you could defer the tax on the seller note to be paid in future years when that note is repaid in a potentially lower tax environment. Finally, you could take advantage of the §1042 capital gains tax deferral and pay zero capital gains taxes on your sale to an ESOP regardless of how rates change (presuming the tax changes don’t ensnare the §1042 provision).

While the tax rate changes will have an impact on ESOP transactions, we look for tax advantages coupled with the flexibility of ESOP transactions to continue to drive ESOP activity. As noted above, we anticipate accelerated volume this year will likely slow activity over the following two to three years. Please reach out to us at PCE to obtain more information and guidance on what an ESOP transaction will mean to you, your company, your employees, and, of course, your gross and (more important) net proceeds. Watch for Part 2 of this mini-series, which addresses the proposed tax law changes as they relate to companies that are already ESOP-owned.